​Guide to Junior Competitions
A brief summary to help you know what’s what, from scoring to competing.


A sport with a long history
Fencing is one of just five sports to have featured in every modern Olympic Games. In the UK it maintains something of an elitist reputation, but clubs like Camden have gone a long way to broaden the appeal and diversity.
​
The object of the game is to use your weapon to strike your opponent whilst avoiding being hit yourself. Fencing is only ever contested one against one, although team events exist. The sport is broken down into three weapons types: the epée is the heaviest sword, the foil is a lighter thrusting weapon, and the sabre is a cutting and thrusting weapon derived from the cavalry sword. 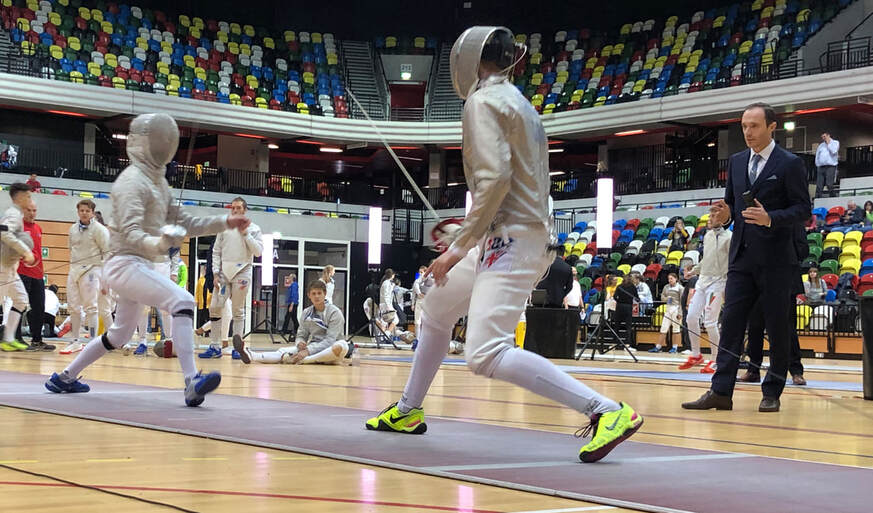 Scoring - What’s going on?
In order to register the scores players’ swords are electronically sensitive, as are the lamés, (metal jackets), they are connected by a body cord to the scoring box. When a strike is registered there is an audible tone and a light illuminates to indicate who scored the point. Fencers must wear a variety of protective attire to minimise the chance of injury. This includes a mask, a plastron, a jacket, glove on the weapon hand, chest protectors for girls ages 10+. The club provides kit to fencers and lends kit to those competing therefore avoiding the need to purchase kit unless you wish to do so.
The action takes place on the “piste” that is 14 metres long strip with two en-guard lines four metres apart, this is where the fencers start each point from.

Scoring is done differently in each of the three weapons.
With the sabre strikes everything above the waist counts, the rule originating in the cavalry days when striking an opponent’s horse was considered ungentlemanly. The hands do not register but the wrists do, and competitors use both the tip and blade of the sabre to score points. As with the foil, should players strike each other at the same time the referee will use the “Priority” rule, awarding the point to the competitor who began their attack first or established “Priority”. Priority can be won and lost for example by parrying the opponents attack then landing your own attack on target.
When using the foil its only scores when striking the torso, neck, groin and back count and points can only be won using the tip of the weapon, not the side of the blade. with foil, if players strike each other at the same time the referee will use the “Priority” (right of way) rule.
With the epée the right of way rule does not apply and both fencers may score simultaneously, unless it is the deciding point when neither strike counts. Only the tip of the weapon may be used and the entire body is a target in epée.
Barging the opponent, using your hand to cover the target zone or foot faults can lead to a points penalty at the referee’s discretion.
To the uninitiated parent or child, watching fencing can be frustrating to follow. Winning and losing actions are not always that obvious. If you are a fencing beginner (or a parent), watching fencing bouts is one of the best things you can do. In time the concepts should start to make sense and before long allow you to understand each off the actions.
The Referee will start each point with, enguarde, pret, allez, (all the actions are spoken in French with English sometimes used at the younger ages. The referee will call halt when the point is scored and make a decision, and account the result of each point as the bout continues. Here is a link to a short guide to the referee’s signals, https://youtu.be/GWHX3r2aalU
​​
At Competitions, the basics
When you (and your child) arrive at a competition it is best to check-in straightaway so the competition organiser knows you have arrived. The time shown on the website is when check-in closes, if you have not checked in by that time you will likely be scratched from the competition. Therefore aim to arrive at least 30mins before the checkin closes, making time to change and then warm up thoroughly before the first bout/match. Fencing normally starts about 10 mins after check-in closes.
All the fencers in the competition are then put into groups of 5, 6 or 7 fencers. These are called 'poules'. You fence everyone in your poule once. The winner is the first to 5 hits or the fencer in the lead after 3 minutes (2 minutes for U9s). If the scores are drawn after time has run out then there is an extra minute of fencing with special rules, called 'priority'. The results of all the poules matches are used to decide your seeding for later rounds of the competition, so it's important to try hard in all your matches for every point.
There is usually a competition notice board located somewhere in the fencing hall, showing the poule allocations and, later, the results. Some competitions may even have information live on the internet so you can view them on your smart phone.


Food & Drink
Take along plenty of drinks, fencers can get hot in the layers of kit, and children dehydrate quickly, without realizing it. Fencers sometimes find it hard to eat during competitions but bananas, dried fruit and cereal bars provide good sources of energy.

Fencing Etiquette.
Fencers should salute their opponents and the referee at the beginning of each fight and shake hands at the end. Often the oposing coach will shake hands with you and your coach after the match; this is fencing tradition and a show of good sportsmanship. During each bout, if you don't understand a decision, ask politely for the referee to explain it, but don't argue.
As in all parenting, to set an example by showing courteous and sporting behaviour, appropriate to a children's event. Standing at the side of the piste shouting angrily will not be welcomed by the organisers at competitions and can have your child penalised for your actions.

Between bouts
When your child is not fighting, they should remain near your poule group by the sides of the piste. Fights can finish very quickly and referees get annoyed when young fencers vanish!

After the Poules
At the end of the poules, check the poule sheet to ensure that your results are recorded correctly. If the results are correct, sign the poule sheet, if they are incorrect don't sign until they have been corrected! You will have to check the poule results again on the notice board to make sure they have been entered into the computer correctly. You normally only have 5 minutes for the results being posted to notify the organisers of a mistake.

CFC encourages and supports its young fencers in various competitions throughout the year.


Spring/Summer is the busiest period, but there are also a couple in the Autumn.  Competitions are usually on a Sunday.  The coaches usually send an email to chase us up to enter them. Late entries attract a higher fee. Get them in your diaries early and get your entries in!  NB we don’t generally go to the ones in Cornwall, Durham, Cardiff or Scotland.  It doesn’t mean you can't.

For all these competitions your child must be a member of CFC and have registered and paid your annual subscription with British Fencing.  Your child will not be able to enter and/or compete without them.


Leon Paul Junior Series (LPJS)
The LPJS is a really great way to give your child that experience in a friendly environment to build up their confidence and to see what they have learned put into practice.  Unlike the international circuit of competitions, the idea is to give the children as much competition experience as possible. There are usually no “cuts” after the LPJS poules and all children play on to compete in the direct elimination round.

It is up to you to sign up for these competitions and pay the fee, via the LPJS website, go to the calendar https://leonpauljuniorseries.co.uk/competitions/calendar  and click on the event and choose the relevant age group for your child.  If in doubt about which age group your child is in please check with your childs coach. Once you have signed up make sure you’ve notified coaches, so they can ensure they have the right number of coaches attending to advise your child at the event.  A small charge is made per fencer as a contribution towards coaching costs and you will receive an email from the treasurer requesting payment.
NB. 1st January each year is the determining date so you will find your child, if born before 1 January may be in a different age group to a school class peer if born after 1st January.


BYC
The BYC is held each year. It's a big event, well worth going to and the kids get plenty of matches. CFC usually field a team, but only those fencers who have attended and qualified (top 4) at one of the London regional events.  There will be ‘cuts’ after each poule in the final. Depending on check-in times you may need to travel up the night before. If the local Travelodge is full, some families have decided to stay in Chesterfield the night before as it breaks up the journey and is only 30 mins away in the morning.


Challenge Wratislavia (Poland)
http://www.challengewratislavia.pl/en/
This competition is only for fencers between the ages of 9 and 15 (determined by age 1st January in the relevant age catergories). Please speak to one of the coaches to check whether it would be beneficial for them to attend this event.
It is usual for a parent to accompany their own child.  CFC will provide a coach on the day. We recommend flying on the Sunday starts early the next day.  Ryanair often provide the best deals, flying via Stansted to Wroclaw.  Lift sharing to Stansted makes much sense and we recommend that you share the extra cost of a check in bag for a groups sabres.
CFC will sort the entry for this competition for you (and will need to be reimbursed once paid). You will be responsible for your travel and accommodation costs.   Accommodation options include http://www.accorhotels.com/gb/hotel-A073-novotel-wroclaw-centrum/index.shtml  or the classier http://www.grapehotel.pl/
We will go out as a group for supper on the Saturday night. The kids usually have a great time as they get to hang out "off piste".
Why Wratislavia?  This gives your child early international experience – complete with cuts after the first and second poules – there are just so many competitors.  Your child will fence children from all over the world from Russia to Egypt.  It is a fantastic experience for them and also a great bonding opportunity for you and your children with CFC and other UK clubs. It is also a good opportunity to get to know other CFC parents. 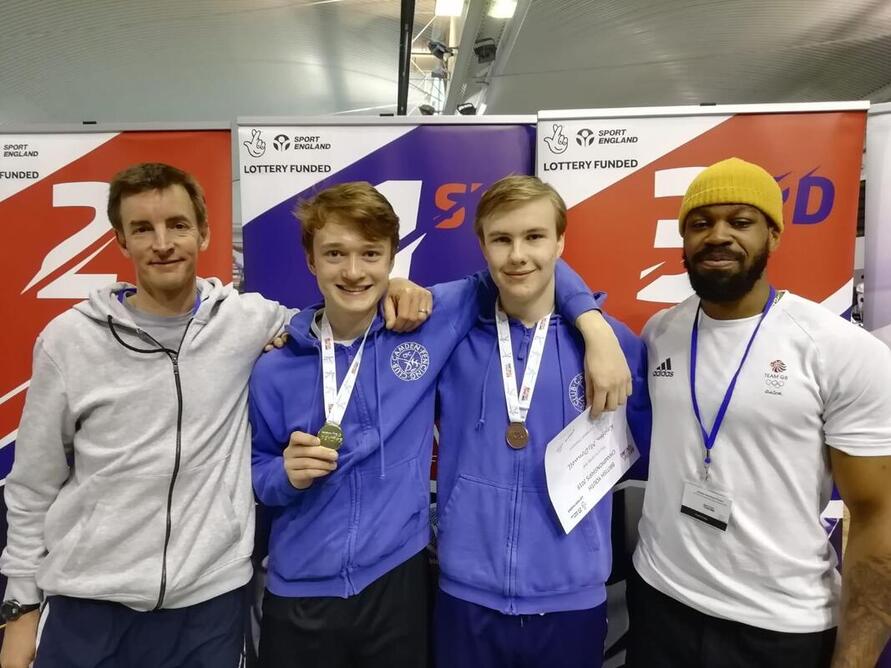